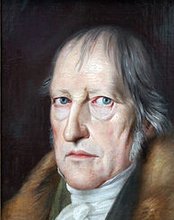 Society "to care for Hegel's spiritual legacy, critically to research and present his philosophy in its historical development and in its manifold relations to preceding and succeeding theories, to work out the contemporary significance of Hegel and his thought and, especially, to investigate and further scientifically that dialectical method closely associated with his name in all its manifestations and in its application." (§ 1 of the Articles of Association from 17.02.1983)

Organs of the Society are:

(a) the General Meeting, which takes place every two years in conjunction with the Hegel-Conferences,

(b) the International Advisory Committee (15 Members) and

(c) the Executive Triumvirate, which selects from its members a Chairman (President) for two years.

The International Hegel-Society organizes every two years an INTERNATIONAL HEGEL-CONFERENCE. The conferences are open, meaning: Anyone who wishes to participate can register to present a paper in a section and/or take part in the conference proceedings. Membership in the International Hegel-Society is not a presupposition for such participation. The conference papers are published in the HEGEL-JAHRBUCH / HEGEL YEARBOOK, which the Executive Triumvirate of the Society edits in cooperation with the local organizational committee of each conference. Since the 1993/94 volume, the Hegel-Jahrbuch has been published by the Akademie-Verlag, Berlin.

Since 1994, the series HEGEL-FORSCHUNGEN has also been published by the Akademie-Verlag, including monographs, anthologies and editions of Hegelian philosophy and its historical influence.